On the market there are braids that have more or less the same construction as TwinPack™. The major difference is the size of the rubber core and the production method the braids are built up of.

The normal design for this type of common braids is that the rubber core is bigger and has less strands and fiber, which cost less.

The disadvantage with a bigger rubber core is (as proven in several test) that the rubber core get out and separates from the braid when the packing is compressed and exposed for number of cycles.

When the core slide against the gate the rubber core start to roll and will be exposed to wearing.

The braid is build up of strands of graphite filled Teflon with Silicon lubricant. Plaited together with Teflon impregnated Kevlar fiber strands which all covers the corner of the braid as a reinforcement.

The rubber core is made of Silicone. The design, with the rubber core, gives the packing a more flexible, elastic profile and function. The diameter of the core has been established through several tests in lab and confirmed in numerous installations.

With the rubber core, the packing will have a pre-energized function for the stuffing box. The braid has only a small amount of liquor that can be drained out. The result is a box that is adjusted to the function of the gate / valve

DH Stainless have our main distribution stock hub at our head office in North West England as well as stock branches in Scotland and South East England. 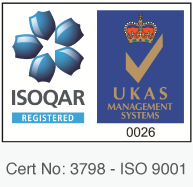